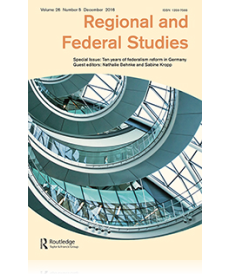 The effect of reformed legislative competences on Länder policy-making: determinants of fragmentation and uniformity

The Federalism Reform I (2006) transferred some additional legal competences to the German Länder to provide them with more autonomy. Our analysis is guided by the question as to how fragmentation and uniformity concerning the content of the new Länder laws can be explained. To this end, we develop a theoretical framework based on a short review of the literature on the field. Subsequently, the framework is tested empirically on the basis of four selected legislative competences. Our results show that differences in party positions and problem pressures result in the fragmentation of laws. This applies also to competition under budgetary constraints, whereas competition superimposes the first two factors. Uniformity was influenced by similar party positions, and particularly by networks of experts.